In Florida, there are several types of ants that commonly infest homes and businesses. They range in size from tiny to large and all are social insects, meaning they live and work together in large numbers.  In fact, a single ant colony may contain several thousand ants.  The majority of ants are considered nuisance ants, meaning they’re annoying but not necessarily a threat to health or property.  There are a couple that prove to be more problematic than others.  Keep reading to learn more about all of these ants. 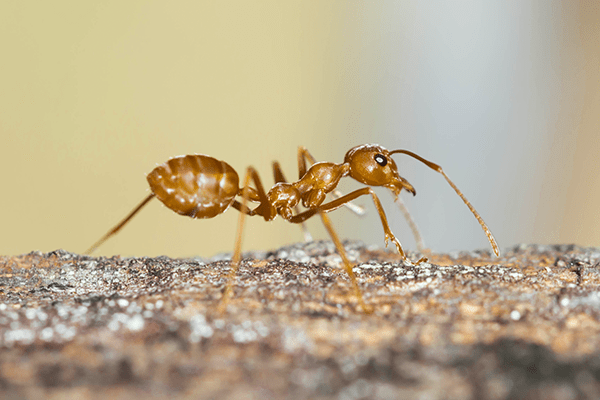 Caribbean crazy ants received their name from their quick, erratic movements. These ants are golden-brown to reddish-brown in color and have the unique ability to cover themselves in formic acid in order to protect themselves from their natural predator- the fire ant. Caribbean crazy ants are active when the temperature is above 60 degrees and live in very large colonies with multiple queens making these ants particularly difficult to eradicate from properties. 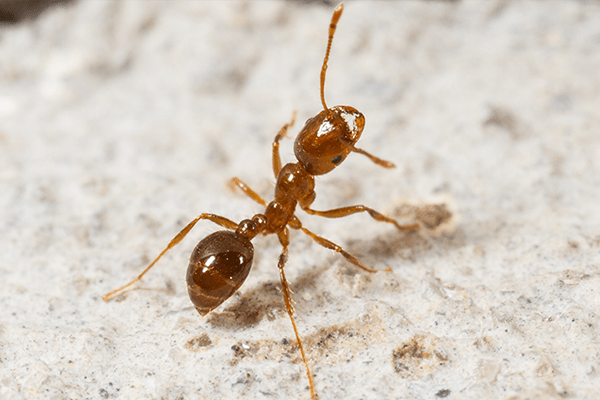 Red imported fire ants are an extremely aggressive type of ant that is attracted to warm, humid environments and are active year-round. Dwelling in underground nests (typically located in open sunny areas), these fire ants will sting anything they deem a threat to their colony or that they come in contact with.   A small species of ant, they are darkish-red in color. 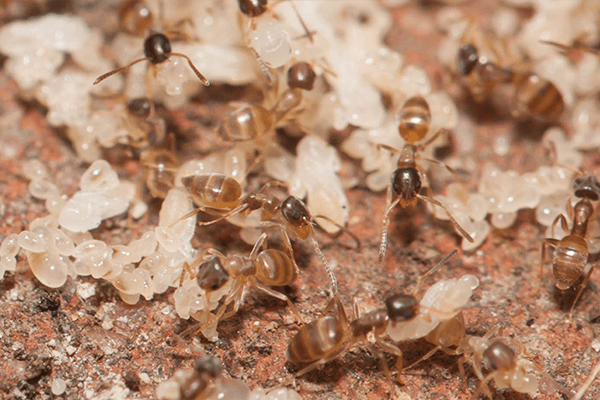 Difficult to see because of their small size and coloring, ghost ants are aptly named.  These tiny ants have a dark colored head and thorax, while in contrast, their abdomen and legs are almost translucent in color. Ghost ants are a nuisance pest that are found living in warm climates and are active year-round. 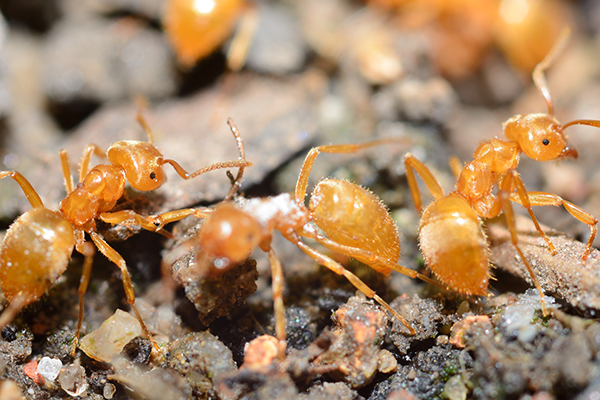 Small in size and known for their habit of stealing larvae and pupae from other ant nests, thief ants are shiny, smooth ants that range in color from yellow to bronze to dark brown.  They create their nests beside other ant colonies so that they can raid them.  Interestingly enough, they create tiny tunnels to gain access to the neighboring ant colonies they intend to steal from. 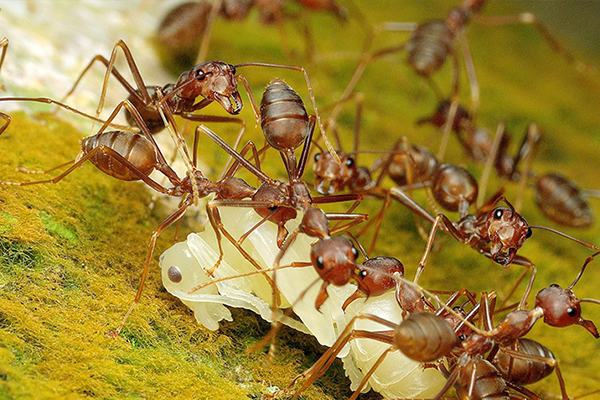 Pharaoh ants carry and transmit serious disease including salmonella and Streptococcus. For this reason, they are considered more than a nuisance pest.  Really, they could be considered dangerous pests especially in hospitals (where they’re known to invade IVs and contaminate wounds) and environments that must remain sterile.  Pharaoh ants have pale yellow to red colored bodies and their abdomens are almost black in color. The queens are typically darker in color than the workers. 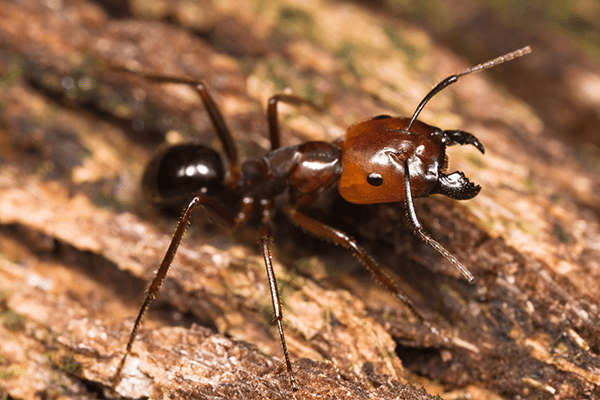 Bigheaded ants are identified as either being a minor worker or a major worker. The minor workers’ body regions are proportionate in size; while the major workers’ heart-shaped head is disproportionately larger than the rest of the body. Bigheaded ants are considered to be nuisance pests and nest outside.  They can cause foundational issues, on occasion, when nesting close to your home. Rarely are they found inside except for when they accidentally enter while foraging for food sources. 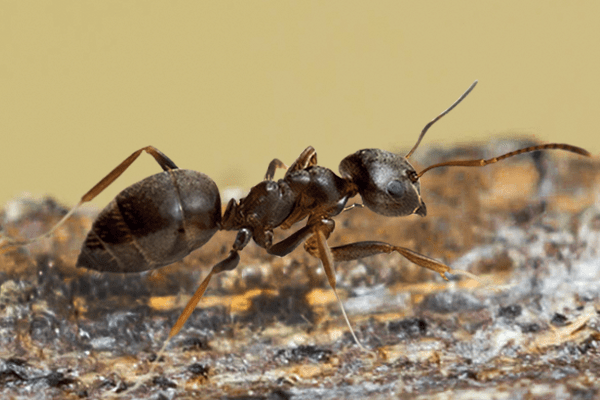 The white-footed ant is a very small nuisance ant that has a dark brown to black colored body and distinctive whitish-yellow feet. These ants are most active during the rainy seasons when their main food source is most abundant. White-footed ants feed on honeydew which is produced by aphids as they feed on plant sap. 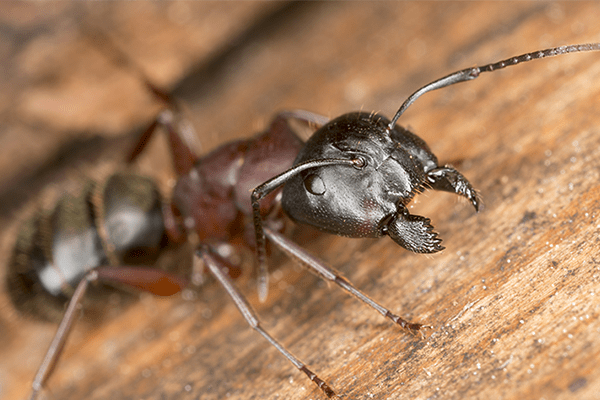 Wood destroying carpenter ants are those large ants (typically black or dark colored) that excavate wood for the purpose of creating galleries.  Unlike termites that actually consume wood, carpenter ants tunnel through wood in order to establish nesting spots where they focus on growing their numbers.  They feed on honeydew, other insects, and provisions they pilfer from kitchens and pantries.  Carpenter ants often enter structures that have wood that has been damaged by water or that is rotting.   Left unaddressed, carpenter ants can cause extensive damage and for that reason are considered more than a nuisance. 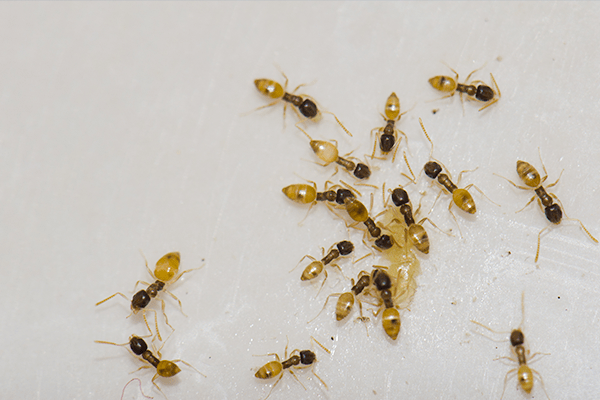 Argentine ants are small ants that are shiny dark brown or shiny black in color. These ants live together in extremely large colonies. A single Argentine ant colony can have thousands and thousands of workers and hundreds of queens living and working together. Argentine ants will invade homes in very large numbers and contaminate food sources.

How do I tell the difference between a flying ant and a winged termite?

Flying ants and winged termites look very similar and can be difficult for homeowners to tell apart. The first thing to know about either species is that all reproductive members of either an ant colony or termite colony have wings. The two species of ant and termites that are most often confused with each other are the carpenter ant and subterranean termites. However, if you look closely there are some visible differences between the two species that can help you to identify if the winged intruder is a termite or ant!

Where do ants nest?

Ants will nest in different areas depending on their exact species.

Caribbean crazy ants typically nest in the soffits of houses, under landscaping timbers, rocks, wooden debris, in underground electrical tunnels, and in the cracks of cement.

Red imported fire ants prefer to build mounds in open sunny areas but can also be found nesting inside of rotting logs and stumps.

As mentioned above, thief ants nest near other ant colonies.  It’s common to find their nests underneath rocks and logs; inside of wall voids and behind baseboards.

White-footed ants nest under almost anything that is lying on the ground including landscape timbers, tree stumps, and heavy vegetation. Inside they can be found nesting behind walls voids and inside of potted plants.

Ghost ants nest outside under stones, logs, firewood or in potted plants. When nesting inside of a home they can be found behind baseboards, wall voids, and cabinets.

Pharaoh ants nest in warm humid areas that are close to food and water sources; they can typically be found inside of wood, behind walls voids, baseboards, and crawl spaces.

Bigheaded ants are typically only found nesting outside under logs, mulch, firewood, patio blocks or stones. If they do find their way inside they will nest under carpeting or behind baseboards.

Carpenter ants nest inside of hollowed out dead trees and in firewood and fence posts. Inside, carpenter ants can be found tunneling through and nesting inside of walls voids, crawl spaces and even foam insulation.

Like many of the other ants discussed, Argentine ants nest under logs and other organic material.  They can also be found under concrete slabs and among construction debris.

Not all ants are dangerous.  In fact, several are annoying but pose no significant threat to health or property.  Some exceptions are fire ants (their sting packs a powerful punch), Pharaoh ants (dangers associated with these pests are mentioned above), and carpenter ants (they’re not dangerous to people but they will damage homes and businesses).

Why do I have an ant problem?

Like most things we consider to be pests, ants are found living in, on, or near properties and homes that offer them easy access to their basic needs - food, water, and shelter. Once ants are on your property attracted by things like garbage, gardens, pet food, and nesting sites, it is only a matter of time before they invade your home while about and about foraging for food and satellite nesting sites. Many species of ants will also invade homes when the weather outside makes it so they can’t live comfortably; very hot, very dry, or very wet weather will drive ants indoors.

How do I get rid of ants?

If you have found that ants are living on your property or inside of your home, contact Keller’s Pest Control for help. We have the skills, expertise, and effective pest control solutions needed to protect people and property from invasive ants. To learn more about our ant solutions, give us a call today at Keller’s Pest Control.

How To Keep Ants Out Of Your Home

Why Do I Have Ants In My Bradenton Home?

The Key To Eliminating Ant Infestations Inside Your Bradenton Home 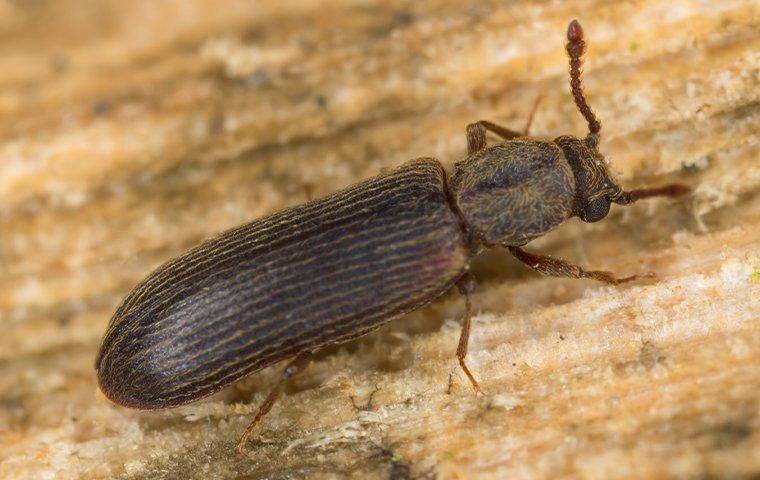 What To Do About Powderpost Beetles Around Your Bradenton Home

Can you recognize signs of a possible powderpost beetle infestation? Consult with a pest control professional regarding a property inspection.... 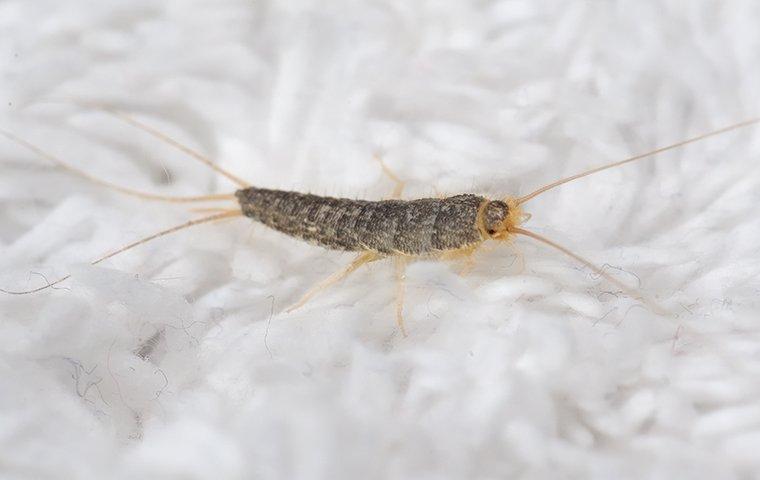 How Bad Is It To Have Silverfish In My Naples Home?

Have silverfish invaded your home? Promptly contact a local pest control company for professional assistance with handling these unwanted pests.... 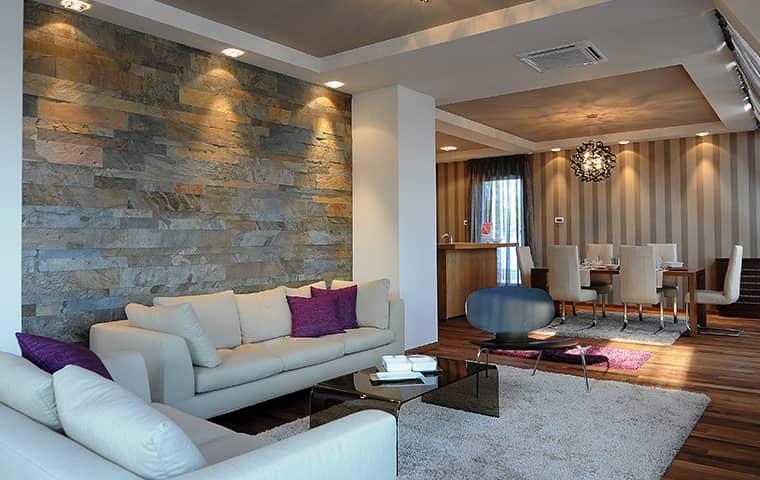 How To Keep Your Naples Home Pest-Free All Year

Are you struggling with unwanted pests in your home? Promptly seeking assistance from a professional pest controller is the best course of action. ... 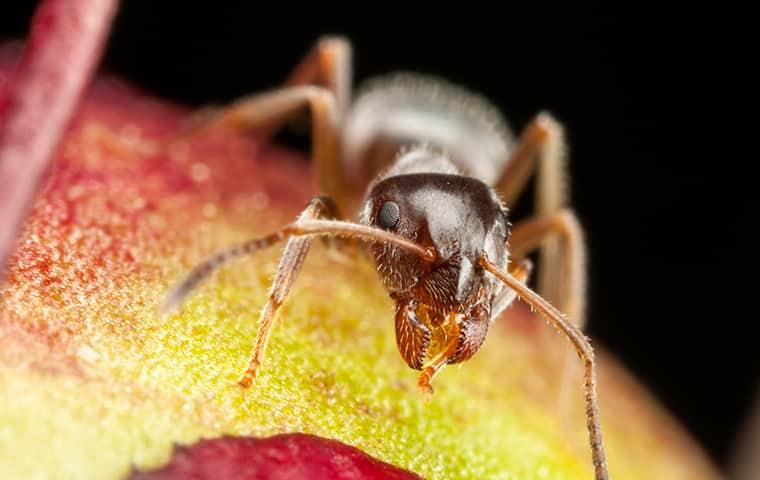 What It Takes To Get Rid Of Ants In Your Naples, FL, Home

Do you have ants in your Naples home? Pest control companies today have highly effective solutions for safely ousting ant infestations....